Many of us (including your webmaster) served on her in places like Spain, Italy, Charleston, New London, Kings Bay and the war zone during the first gulf war that are all big and important parts of her history. However, she served several tours in Holy Loch and many of our shipmates, as well as many residence of Dunoon have fond memories of our ship there.  Thanks to Jean McAulay Mackay‎ who originally posted this on Facebook and to Danny and Judy Poole who got us a cleaner, digital version from the publisher.

We continue to build the site as time allows.  Check back often.  Welcome aboard.​

​WE ARE SORRY TO REPORT that our ship has completed her final trip and, according to reports from shipmates in the area, has been completely cut up in Brownsville, TX.  She will live forever in our hearts. 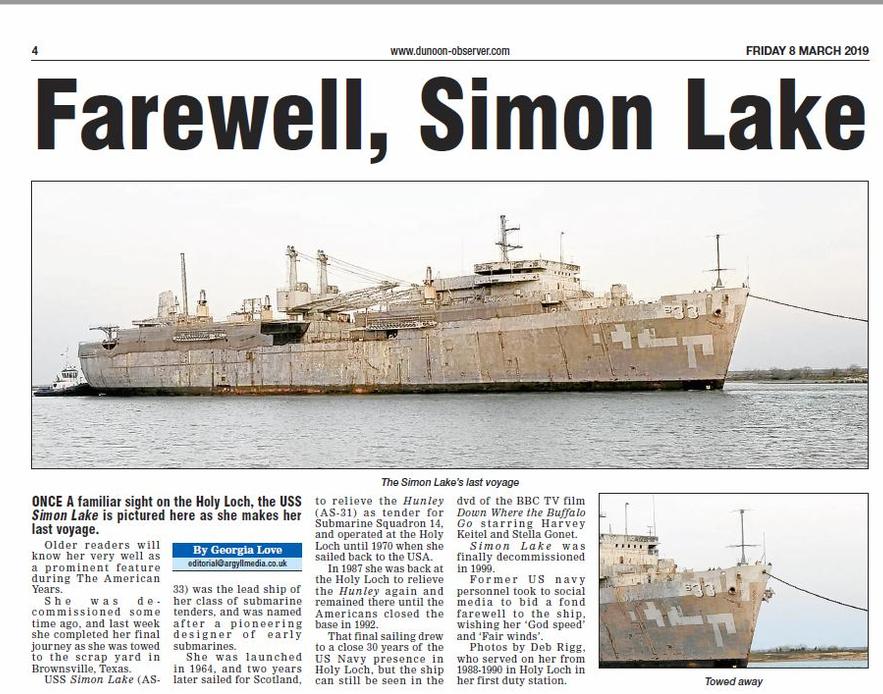 The USS Simon Lake Association Reunion has been postponed until late September, 2021. It will be held In the Lancaster, PA area as was planned for this year. It was a tough decision since many wanted to have it.  However, around 50% of those who attended past reunions were in favor of waiting a year. We have many in their 60's and more.

Those who want to attend a reunion this year, and are able, are encouraged to attend the reunion being put on by a group who served from about 1995 through decommissioning.  They are welcoming all.  See Below!  SEE YOU IN 2021. 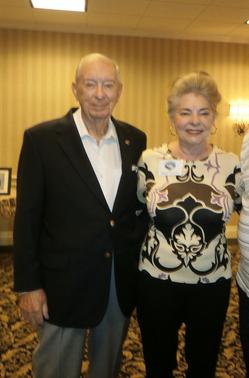 It is with great sorry we mark the passing of Rear Admiral George Ellis, USN (ret). After graduating from the Naval Academy he was a junior officer on a submarine in the Pacific during WWII. He went on to command several submarines as well as the USS Simon Lake in Holy Loch during the late 1960's. As a flag officer he had several high profile responsibilities. Admiral Ellis lost his 1st wife many years ago and then lost his 2nd wife earlier this year. George and Carol were a great part of many reunions right up to and including last year. Admiral Ellis, you will be missed. Fair winds and following seas sir, we have the watch. 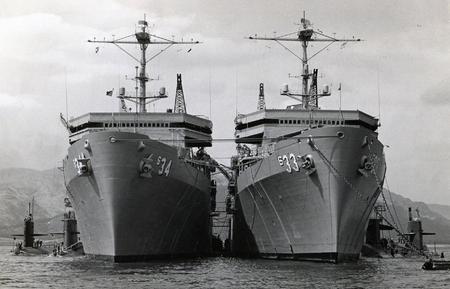 The Simon Lake arriving at the Port of Brownsville, TX at the end of her final voyage.

The AS33 departing The Norfolk Naval Shipyard for the ghost fleet on the James River.  December 3, 2015.  Thanks to Mike Christian for the photos. 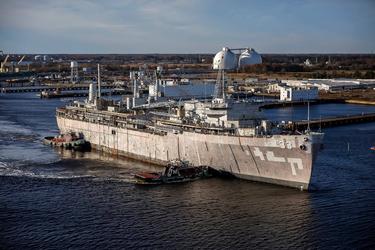 There is also a reunion being planned by a group for those who served from around 1995 through decommissioning. It is not being done by this Association. It will be in Las Vegas September 17 - 20, 2020. Those interested should look on TogetherWeServed.com or
https://www.facebook.com/groups/2426944737570428/?ref=share or email AS33.vegas.2020@gmail.com.  IT IS STILL ON and they have great plans. Now is a good time to makeyour plans if attending.

We are building pages dedicated to pictures and videos to bring back memories.  Please use the Contact Us page to get in touch if you have something to contribute.

Visit the history page and the reunion pages often, we are adding content often.

This applies to all shipmates and should be updated to read "ANY MAN OR WOMAN".

ANY MAN WHO MAY BE ASKED IN THIS CENTURY, WHAT HE DID TO MAKE HIS LIFE WORTHWHILE, CAN RESPOND WITH A GOOD DEAL OF PRIDE AND SATISFACTION.

“I SERVED IN THE UNITED STATES NAVY”